OpenLife Nigeria reports that Lawal Olayinka Abiodun, latest house winner in Glo Festival of Joy promo, is in celebration mood.
The 38-year-old man who won a three-bedroom house in the Globacom’s customer-reward promo, out of joy, said becoming a house owner came too easy and too suddenly.
The supervisory staff of Pacific Coast Trading company who could not hold back his Joy at the presentation ceremony held on Friday, December 23, kept referring to the prize as a miracle and a dream turned reality.
“The whole episode has been much like a dream to me. Is this how people become landlords? It is like a fairy tale encounter that one gets to read in books,” he stated.
The expectant dad who wedded only in June is the sixth house winner thus far in the promotion, five other winners having won in Ibadan, Abuja, Port Harcourt, and Lagos.

Glo Festival of Joy promo offers 20 houses, 24 brand new cars, 100 power generators, 200 sewing machines and 1,000 rechargeable fans to subscribers to reward their loyalty to the brand over the years.
Special guest at the ceremony who is the Executive Chairman, Ibeju Lekki Local Government Area, Engineer Abdullahi Olowa, lauded Glo for its pioneering leadership in the market.
According to him, the company has always distinguished itself as the industry pacesetter from inception.
“You are not only providing services to subscribers, you are also impacting lives across the country”, he quipped.
The company’s Regional Manager in charge of Lagos 4, Mr Oseghale Odion, encouraged other Glo subscribers to be part of the promo by dialing *611# and recharge their lines as appropriate for the various prizes of their desires.
Said he, “subscribers who desire to become owners of 3-bedroom houses like today’s winner courtesy of Glo Festival of Joy must make data subscription(s) of at least N20,000 during the promo period”.
In attendance were guests including Mrs Ene Ochagla, Chief Administrative Officer of the National Lottery Regulatory Commission as well as Rotimi Salami and Bimbo Thomas who are both Glo brand influencers. 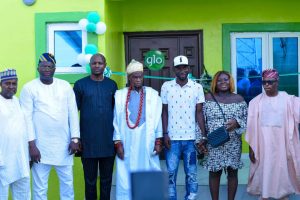 I Was Stunned When I Got A Call From Glo—Garuba, Latest Glo Festival Of Joy House Winner

Enhanced e-Passport: Aregbesola Moves Nigeria To Number 1 In Africa And 5th In The World