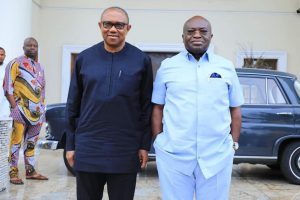 OpenLife Nigeria has reliably gathered that just few days after Governor Samuel Ortom of Benue State accorded Peter Obi, the presidential candidate of Labour Party, a warm reception at the Governor’s private residence in Abuja, Governor Okezie Ikpeazu of Abia State, early Saturday also received Peter Obi at his private home in Abia State.
At the meeting, Governor Ortom challenged presidential candidates of the various political parties in the coming general elections to put Nigeria above personal interests and urged Obi to approach other presidential candidates to step down for him.
He said Nigerians were in dire need of people with “commitment and competence” that would fix the leadership crises that had plunged the country into outright chaos, adding that Peter Obi fits the bill as an outstanding candidate who should be supported.
The Governor noted that the Labour Party’s presidential candidate is one among the qualified Nigerians that the people looked forward to help take the country out of the woods.
The open endorsement however did not surprise event watchers as Ortom has consistently faulted the manner the presidential candidate of the Peoples Democratic Party, PDP, Atiku Abubakar picked governor Ifeanyi Okowa of Delta State as his running mate,.
So divided is PDP over Atiku and Okowa’s candidature that governors Seyi Makinde, Okezie Ikpeazu, Nyesom Wike and Samuel Ortom of Oyo, Abia, Rivers and Benue respectively, recently met in London to fine tune the modalities to “Teach Atiku a lesson,” over the choice of his running mate.
To put effect to their threats, they collectively boycotted PDP’s final solidarity rally for the Osun guber candidate, Senator Nurudeen Adeleke in the July 16 election.
What followed next is Obi’s visit to one of the quartet, Governor Okezie Ikpeazu on July 23.
Insiders averred that the visit was a continuation and gradual implementation of the plan to support the former Anambra State Governor.
According to information signed by Sir Onyebuchi Ememanka,Chief Press Secretary to the Abia Governor, Obi was at the Country Home of Governor Okezie Ikpeazu at Umuobiakwa, Obingwa LGA early this morning for a courtesy visit.
Mr Obi arrived Umuobiakwa quite early this morning and was received by his host, Governor Okezie Ikpeazu.
Former Governor peter Obi informed Governor Ikpeazu that he was in Abja State to attend an event at the Mater Dei Catholic Cathedral Umuahia and in line with official courtesies and protocols, he had to come to see the Governor before proceeding to the event.
They discussed a wide range of issues ranging from Security, Economy and Politics.
They also had a private breakfast session.
Governor Ikpeazu presented him with a Souvenir bag containing the first ever Abia State Long Term Development Plan and the Abia State Industrial Policy which was presented to the Governor yesterday by ECOWAS Representative at the United Nations Industrial Development Organization (UNIDO).
Mr. Obi also spoke to newsmen for a few minutes before leaving for Umuahia,” the statement stated.
Reacting, a former Reps member from Abia State who spoke to OpenLife on Saturday morning maintained that what was not said was much bigger than what was said.
The former law maker noted that “The purported Souvenir bag containing the first ever Abia State Long Term Development Plan and the Abia State Industrial Policy was symbolically presented to Obi to implement when he becomes the President. They are all going to support Obi. To receive Obi that early morning is a statement of how much they love him and would support him all the way to win the election. Watch it, Ikpeazu will not hand such souvenir to Atiku if he visits,” he stressed.