The former Governor of Anambra state and presidential candidate of the Labour Party, Peter Obi has revealed the reason for his visit to the Governor of Rivers State, Nyesom Wike.

Speaking about the visit, Peter Obi via his verified Twitter page on Wednesday, disclosed that he visited Port Harcourt to confer with the governor about vital issues of national interest. 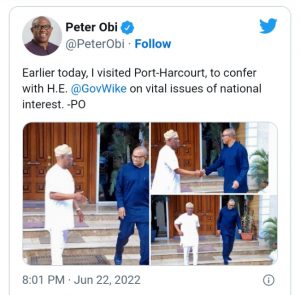 The two politicians were seen shaking hands in front of Governor Wike’s residence in pictures online.

Wike was spotted in white, while his guest, Obi wore a blue senator material.

The special assistant to the governor on media, Kelvin Ebiri, confirmed the meeting in Port Harcourt. He, however, did not state the reasons for the meeting which is holding behind closed-door.

The meeting lasted for a few hours in the personal residence of the Rivers state capital.

Wike is widely rumoured to be plotting an exit from the Peoples Democratic Party, PDP following his loss at the party primaries and not emerging the running mate to Atiku Abubakar, the party’s 2023 presidential flag-bearer.