Peter Obi Is The Only Candidate That Inspires My Generation, 13 Years Old Student Declares

Peter Obi Is The Only Candidate That Inspires My Generation, 13 Years Old Student Declares

OpenLife Nigeria reports that less than 24 hours when the entire Nigeria was amazed over the awesome momentum of the Imo State one million support match for Peter Obi’s 2023 presidential aspiration, a 13 years old student has added her artistic voice in support of Peter Obi.
The NASDEC Royal Schools  SSS 1 student, identified as Promise Sophia Amarachi from Imo State, drew a portrait of Peter Obi on her personal volition because of her belief in the former Anambra State governor.
Sophia stated that Peter Obi remains the only presidential candidate in the 2023 general elections who inspires hope for her generation.
She noted that she looks towards a better Nigeria where her dreams can be fulfilled.
“I drew Peter Obi’s picture because he is an inspiring individual. He has passions for education. His words are so assuring and they make people to develop interest in Nigeria.
“Nigerian should vote for him because he gives promise that he will keep Nigeria safe. Security and education are very important to us who are students. We don’t like staying at home because teachers and ASUU are on strike. Peter Obi will not allow that to happen to us who are students.
“So, Nigeria will become safer if everyone votes for him,” she disclosed adding that the idea to draw the portrait of Obi was solely from her.
“Nobody told me to draw him. I have never met Peter Obi in person but I only rely on information about him on social media and debates on television,” she said.
Speaking on the Obi’s portrait, Honourable Deacon Edwin Ofordile, national co ordinator, Peter Obi Comrades Assembly, POCA, who made the portrait available to OpenLife on Sunday morning, explained that he visited the parents of Sophia on entirely different matter when he fortuitously saw the drawing. On inquiry, Deacon was told that the drawing was done by Sophia.
“In her own little way, she has shown a great support to the presidential ambition of Mr. Peter Obi,” Deacon Ofordile said adding that other Nigerians should emulate Sophia to achieve a better Nigeria from 2023 under Obi and Datti’s government.
“It is good we build a better Nigeria together as one,” he advised. 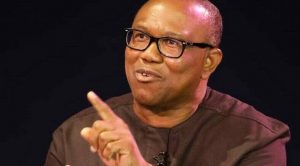