OpenLife Nigeria reports that His Royal Majesty, HRM Joseph David Jeremiah, 1st trustee and Chairman of US Capital Private Bank, has vowed to bail out Ghana from the International Monetary Fund, IMF.

According to a press statement, HRM  David Jeremiah and the US-based bank are ready to bail out and support Ghana and help restore the economy on track.

The US Capital Private Bank, ETO is the first ever to have an ICJ license for banking per the Global Economic Recovery Council and a Triple AAA rating.

The Country rep for the US Capital Private Bank,  HRM King Nii Ayitey Anumle in an interview said that the US Private Capital Bank is ready to cough millions of dollars to help the President Akufo-Addo- Bawumia government walk out from the International Monetary Fund(IMF).

USCPB Ghana Rep, King Oyanka stated that USCPB had already written officially to the Central Bank since 2021 but has not gotten any official response from the Central Bank in regards to the proposal.

He added that this deal, should President Akufo-Addo accept, will be historic and go down well with Ghanaians and the unborn generations. 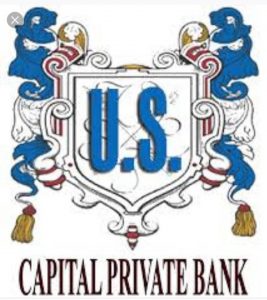 The statement reads in full:

HRM Joseph David Jeremiah is the 1st Trustee and Chairman of US Capital Private Bank, ETO, the confirmed largest asset holding bank in the world. It is the first ever to have an ICJ License for banking per the Global Economic Recovery Council and a Triple AAA rating.

Through the United Nations – Africa development program Link / African Union Agenda 2063 Link; His Majesty, King Nii Ayitey Anumle Oyanka, who is the signatory and account holder of 10billion Euros already allocated and currently in deposit with US Capital Private Bank, ETO, is to  be used as the first tranche of the communications project to run fiber optic cable and fresh drinking water pipelines throughout Ghana and then expand across the African continent.

These funds of the first tranche will jump-start the economy by mobilizing the unskilled, and skilled labor pools promoting GDP extended growth for sustainable development.

HRM King Nii Ayitey Anumle Oyanka shall make available a facility to receive these funds for the project. The Africa development program roadmap will bring a water pipeline, electrical grid, and fiber optic cable to the region to use as a launchpad for connecting the continent to the global network.

These strategic investments will bridge the digital divide and allow Africa to offer products and services to the world while creating many jobs and reducing the need for deficit spending consistent with the RHOD Gold Backed Coin program guidelines.

This is a Historical moment for Ghana.

His Majesty, King Nii Ayitey Anumle Oyanka and HRM King Joseph David Jeremiah, who is a direct descendent of King David ben Jesse of The Royal House of David, signed and were approved by US Capital Private Bank, ETO for the first tranche of 10 billion Euros which has already been transferred and ready for use. The first stage consists of 20 projects in the Ghana Kingdom Under Abola Piam Tunnmaa We Royal Dynasty and Anamase Royal Kingdom of Akyem Bosome Traditional Area in the Eastern Region of Ghana is beneficial to the growth and security in the area due to the impact it will have on the GDP.

We aim to use all human resources to provide opportunities for millions to enter the Global Marketplace.

These newly created skilled and non-skilled labor jobs will activate a mostly dormant workforce and provide many resources for Retailers and other business entities, including but not limited to banks, government agencies, service providers, and education and training resources. This program will impact all sectors. HRM King Joseph David Jeremiah of the Royal House of King David of the Tribe of Judah was appointed on the 27th of July 2021 as the Vice-Chairperson of the Anamase Alliance Royal Council and also Chief of Business Development for Anamase Infrastructure and Traditional Development, making it a seamless transition from planning to implementation because of his direct connection to the assets needed for the projects.

The appointed King David will also provide the much-needed funding resources of upwards of 100 billion Euros to the Central Bank of Ghana to provide collateral for the build-outs using its groundbreaking 2 to 1 Non-Depletion Funding Framework, which provides adequate funds for all sectors while eliminating the risks for all the banks and the Central Bank by providing the funds necessary for indemnity making the transaction non-recourse.

USCPB’S Provisional director for Ghana, His Majesty King Nii Ayitey Anumle Oyanka, has already opened discussions since last year with the Central Bank of Ghana and several other local banks due to the size of the project. We aim to secure a full functional Bank license whose bye-laws focus on economic stimulus from the Central bank for US CAPITAL PRIVATE BANK in Ghana with an international reach to stimulate global trade,  for operational flexibility due to the fact we are using our own money as collateral as well.

The US Capital Private Bank, ETO announced its New Insurance Division to indemnify its transactions further and the commerce of The Central Bank Licensed banks to remove the risks the bank defaults and to ensure all payments owed to the Central Banks will be insured and paid on time, releasing much-needed liquidity into the newly hired workforce and business expansion.

This license is needed to transfer the necessary funds to begin the project’s first stage.

Funding will also be used to assist Government in infrastructure development projects across the country to build roads, agriculture/farming, power plants, government facilities, and a high-speed, high bandwidth fiber optic communications grid. The preceding are part of major plans to bring the continent online as a significant resource for the Global Economy through GDP development. This will create jobs and promote exporting goods and services made in Ghana throughout the world through the world wide web.

Global Innovation Challenge Supports Young Entrepreneurs And Leaders With $10k : How To Apply