OpenLife Nigeria reports that Honourable Gambo Mohammed Ngelzarma Dan Masani, personal assistant to the deputy Senate President on Domestic Affairs, Senator Ovie Omo-Agege, has condoled with the deputy governor of Yobe State, His Excellency, Idi Barde Gubana, who lost two of his children within one week through road accidents.
On Saturday, June 11, 2022, members of the deputy governor’s family were involved in a motor accident in which his seven-year-old son, Mai Mala Buni Junior, died on the spot.
His daughter, Khadija, popularly known as Siyama who was 16 years old was rushed to Dala Orthopaedic Hospital, Kano for treatment on the injuries she sustained during the accident.
As fate would have it, she died on Thursday and was buried according to Islamic injunctions. 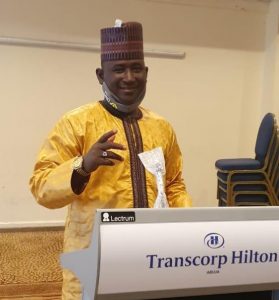 An obviously devastated Honourable Gambo Mohammed Ngelzarma Dan Masani who issued a statement to press men on Thursday sympathized with the deputy governor and his family over the sad loss of precious children.
In a statement he personally signed, the frontline transporter lamented that the untimely death of the two children was a great loss not only to Yobe State but to Nigeria at large.
According to him “Khadija and her brother represented a promising future for Yobe State and Nigeria. Their commitments to education were remarkable assurances that their generation would excel in global competitiveness. Their deaths are irreplaceable.
“At this trying period, I and my family condole with His Excellency, deputy governor Idi Barde Gubana, whose supportive role to our amiable and hard working governor, Mai Mala Buni , has propelled Yobe state to an enviable height,” Honourable Gambo stated.
Further, the 2019 aspirant for Fune South constituency in the Yobe State House of Assembly added that “ May Allah grant the deputy governor and his family the fortitude to stay strong in this moment of grief and may Allah grant the children peaceful rest,” he prayed.

Man burnt to ashes over alleged blasphemy in Abuja (VIDEO)