Social media users across the country are expressing their displeasure over the fate of singer, Banky W in the recently concluded primary election in Lagos.

The singer turned politician in a vote publicly counted and the videos shared online, he won the Peoples Democratic Party’s (PDP) primary election to emerge as the party’s candidate in the Eti Osa federal constituency of the House of Representatives.

When the result sheet was presented to the Independent National Electoral Commission (INEC) Banky lost the election to his rival.

The sheet of the final result has emerged online and Nigerians wondered how the singer lost an election he had initially won.

Check out the result sheet below: 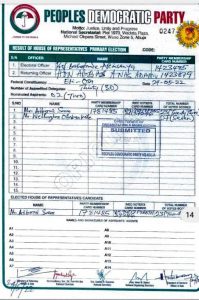 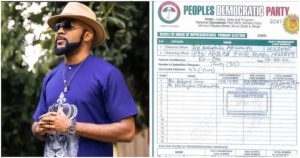 Social media users across the country have reacted differently to the singer’s loss of an election he already won.

Most of them blasted the PDP.

Read some comments below:

Adaigbo_2022: “PDP just schemed Banky W out of the primary. They gave him 7 votes. Shey my eyes dey pain me? No way!! Something is wrong in PDP. Terrible something.”

Deeoneayekooto: “My advice to Banky W is that he should not give up on his music career, politics is not reliable.”

IamOkon: “Banky W has lost, won and then lost again his Primaries in the space of 3 days. Nigerian politics will stress you man, it’s just not for the faint hearted.”

Gbenga Adeyinka Lites Up Epe With  Laffmattazz  On Ileya Monday